Ok, there's not a lot of much excitement for a PC FPS fan like myself at the moment. Quake Wars and Unreal Tournament is coming next year, and there's little else to look forward to in the meantime. That is, until now

I'm looking forward to this title, which is coming out via Steam. I'm still pretty bummed that I won't be able to play Dead Rising since I don't have an XBox 360, but I'll get my fill of zombie killing with the recently announced "Left 4 Dead". It's always interesting to read about new ways or variations of gameplay to spruce up the well worn FPS genre, but it's good to hear that they're going for some kind of co-op teamwork survival horror thing. I think Capcom tried something similar with the Resident Evil franchise like this, but this sounds much more interesting.

The last time I played anything co-op was Bruce Lee on the C64, and a mate would jump in to play the green sumo, so if "Left 4 Dead" is at least equally as fun as that, then I'll be happy. For me, it's a welcomed change from the large scale warfare battle kind of games that I tend to play, and it does beg the question why something like this hasn't been made already (for the PC)!

[quote]Co-operative Multiplayer Action From the Makers of Counter-Strike

"By leveraging its industry-leading AI technology and years of Counter-Strike development experience, Turtle Rock is building upon the elements that make Counter-Strike successful and applying them to Left 4 Dead," said Gabe Newell, co-founder and president of Valve. "What Counter-Strike did for multiplayer action games, Left 4 Dead will do for co-op games."

Left 4 Dead is built atop the most advanced version of the Source Engine and introduces version 2 of Turtle Rock's artificial intelligence (A.I.) technology.

I sorta sound like a shill for this game, but I'm pretty excited. They have some interesting AI happening, team work focussed, replay ability, and.. loads of zombies!Souri2006-11-21 03:17:15

You get to actually play as the zombies in a multiplater setting? thats pretty darn neat. To be honest when im playing my multiplayer online games though i dont want bots involved. So aslong as it supports filling up the entire roster with human players provide enough people connect to the server it sounds like a winner.MoonUnit2006-11-21 05:52:58

Do you ppl know of any other good co-op fps?

It'll be very interesting to see how they approach the idea of players as zombies. Quite a game design challenge, I would think. As a zombie player, I don't think many people would enjoy playing a slow moving weak target who's only real purpose is to provide fodder for the main players, and on the other hand, making them too powerful would be frustrating for the main players. It would be great if the zombie players could choose to play a more strategic role in impeding the progress of the main players as well. In any case, I can imagine it requiring a lot of play testing to balance it all right.

Oh, and please, please, please, make the levels interesting, and offer numerous objectives and even a dynamically generated story to go with it, just to make it more interesting than a simple dash from point A to point B. I can see some incredible potential in this game, and I hope the developers realise it and run with it.

If anyone is interested, IGN has a preview for Left 4 Dead. It's sounding very cool. Also, now that Steam has accepted Paypal as a way to purchase Steam games, I'm planning to get this.

some of the zombies look pretty coo. L4D youtube trailer 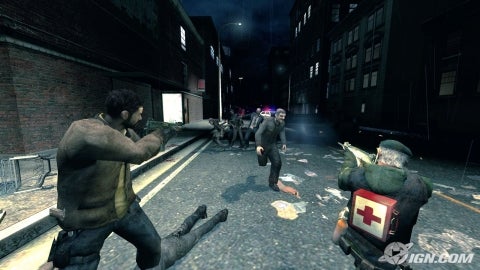